“But, instead of what our imagination makes us suppose and which we worthless try to discover, life gives us something that we could hardly imagine.”

My journey to Madrid was not as simple as I originally anticipated. The weeks leading up to my trip, I was antsy with anticipation with very little idea of what to actually expect. At the beginning of my journey, I left Atlanta, Georgia Friday evening, and landed in Madrid Saturday morning. I walked off of the plane at 2A.M. EST, and made it to my home at around 4:30A.M. EST, even though it was only 10:30 in the morning in Madrid. Exhausted, our ruffled group of travelers got off the conspicuous coach bus, grabbed our luggage, and were introduced to our host families.

Names were being called, and host moms were running out. My roommate and I were standing on the corner waiting, whispering to each other about if we would get lucky with our new family. After what seemed like an eternity (but was only really about 10 minutes), we were called and beckoned by one of our program directors. She introduced us to our fashionably dressed host mom and her husband. To this day, we know her name (which I will keep anonymous for privacy’s sake), but both of us missed his name, and now we’ve let four days pass, and we are in too deep to ask!

Our host mom’s husband took our luggage, and we began to walk towards our new home. Three minutes, a couple of blocks away from our school, we were at our destination. We stopped in front of an apartment building, our host mom pulling out a key to let us in through the doors. I looked around the small lobby with is white marble floors with no idea of which way to go. Because our host mom had opened the doors to the inside, she was holding open the door while my roommate and I pulled our bags in. My eyes passed over a large green door with a small window, thinking it was a maintenance door.

I looked at the stairs and asked, “Are we going up?”

Both my host mom and her husband laughed at us and I looked at them in confusion. Mind you, at this point, I am wondering why they are laughing at my expense. I haven’t slept (I couldn’t fall asleep on our turbulent flight), and I am trying to mentally prepare myself to walk up an un-Godly amount of stairs with my luggage. She walked over to the green door, pulls it open, and exposes two clear doors. I watched her with rapt curiosity as she pushes in the two glass doors, and motions us into the tiniest elevator I have ever seen. The three of us women fit in the elevator, but our host mom’s husband stayed at the bottom, our luggage too large to fit in the elevator with us. Manually, our host mom shows us how to close the glass doors before we hit the button to go up to our apartment. The elevatory lurched to life, and we ascended until we made it to our floor. As a unit, we stepped out, make a swift turn, and our door was literally right there. We walked into a clean, modern, and beautiful apartment. She shows us to our room, and it is time to tour the house and learn the rules.

Typically, our host mom prepares us three meals a day, makes sure our laundry is washed once a week, and makes sure our bedding is set and rooms are in great condition. She showed us where she will leave our packed lunches, how she will set up the table, how to grab coffee or tea in the morning, and told us the rules. They are pretty simple and mostly about courtesy since we are still guests in somebody else’s home. If we are missing a meal at home, we are expected to tell our host mom that it is okay if she does not prepare food for that meal. We do not have a curfew, but we cannot shower after midnight until 8am. Due to the higher price of water in Madrid, our showers are supposed to be ten minutes max. We also have to be very careful to be quiet in the mornings when we leave for class that starts at 9am. Because we generally leave around 8:30am, most of the house is asleep.

After my roommate Emma and I learned all the rules, we laid our weary bodies down and caught up on all of the sleep we lost. Saturday, after our journey, we only woke up to eat lunch at 2P.M. in Madrid and to eat dinner around 8:00P.M. The amount of rest we caught up on definitely contributed to my jetlag the next day. It took me until 1A.M. to fall back asleep, but I woke up a 4:45A.M. and stayed up until it was time to get ready at 7:45A.M.. Sometime between my nap and my slumber, I video chatted my mom and grandparents, telling them about our epic nap, our host family, our lack of plans for the evening, and what we were expecting for the next day. She seemed more settled in the idea of me being abroad, especially since she sent me off at the Atlanta airport with a tearful goodbye, wiping her eyes and waving at me behind what seemed like miles of the black, stretchy rope guiding travelers. She reminded me to be safe, attentive, and a smart traveler before we ended our chat and I went back to bed.

Sunday was filled with a ton of walking. We met up in front of our school as a group, went in for an orientation that lasted a grueling 2.5 hours, and then pounded the Spanish pavement. We walked around Goya (my sense of the streets, regions, and direction are new, so if some of the places are a bit off, I apologize in  advance!). It has a long strip of shopping, including a lot of high-end stores that the average broke college student, like me, cannot afford. On the same street, we walked past Versace, Prada, Hugo Boss, Rolex, Michael Kors, Coach, and a plethora of other brands. Some of the stores even had two stores, seperating the men’s from the women’s on different blocks.

We passed by patrons at high-end coffee shops near the plaza de la Independencia. On our way to the actual plaza, we stopped by the puerta de Alcalá, 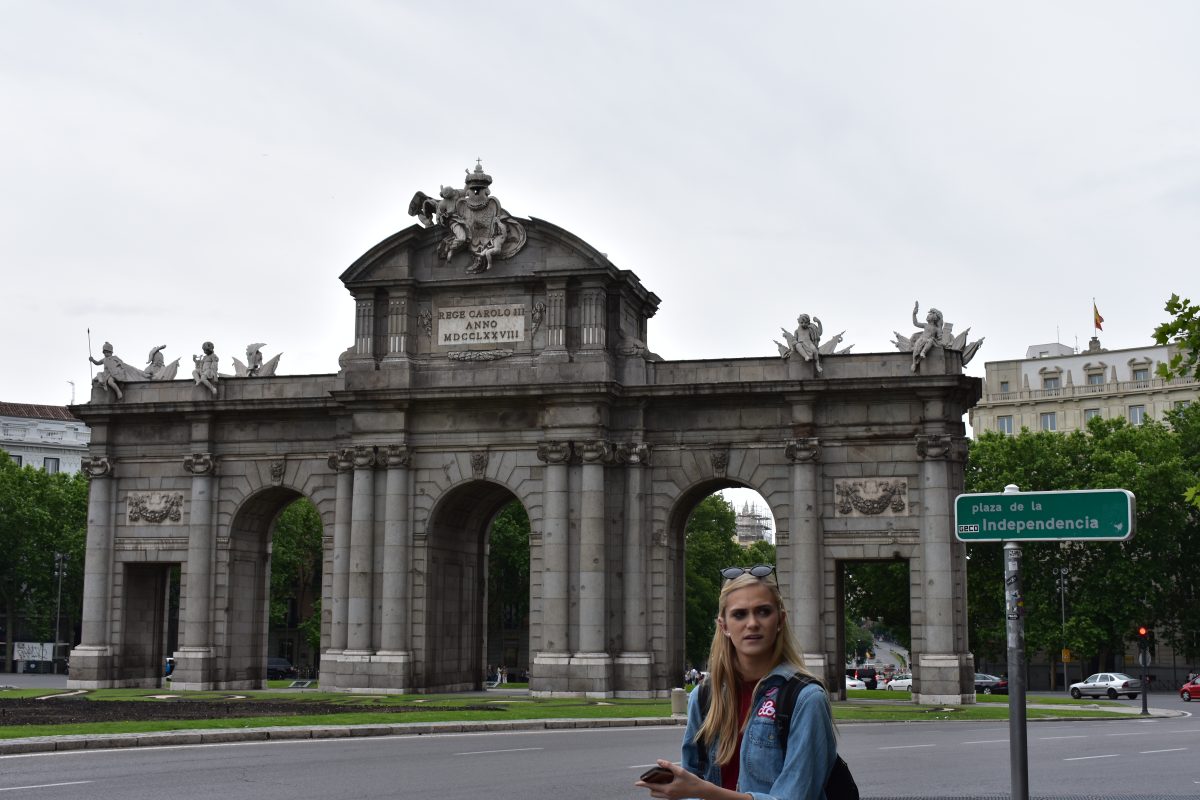 a monument that acts as a gate to the area of Alcalá (I want to say city, but Madrid has providences and communities. In order to fully understand it, I would google it because I am still learning and woefully horrible at geography!). We went to the puerta de Sol, we ventured through Gran Via, made a trip to the Palacio Real de Madrid,

and did some minor shopping because I forgot to pack body wash for our stay. We then proceeded to take a long trek home, stopping here and there to poke our heads into random shops, graze on some snacks, and get home before the Real Madrid soccer game and the block party that ensued after their victory.

Monday was filled with both boredom and a lot of fun. We made it to our first class a little bit early, textbooks and notebooks in hand. Our class lasted around 3.5 hours, with a 30 minute break in between. I found a little shop that sold coffee and small food items. I bought coffee and milk with a pastry called a tortel. I had never heard of it before, so my roommate encouraged me to try it since I clearly had no clue what it was. It was a flaky pastry with a sweet, sugary, fruity filling baked in the middle. Although my coffee was amazing, I opted for sharing my tortel with some of the students from my program until we had to go back to class because it was not my personal favorit and others liked it. When we were finally done with our curriculum for the day, we had a 20 minute break before an hour long presentation about the history behind the artist Joaquín Sorolla. We will be visiting the Museo Sorolla soon, and our instructors wanted to teach the importance of the trip we will be going on. Although it was an informative presentation, the grueling time in the classroom after 3 hours worth of lectures could have been considered painful at best.

After a brief siesta, we went out to do some snacking, shopping, and more exploring. Three hours later, we dropped off a few things in our room before going back to the school to meet up with our entire group. Our activity for the night: eating tapas. We sat down at the back of a small restaurant, about 50 people deep. We ordered drinks, ate three different tapas, and then we all went our separate ways. My roommate, another student, and I walked a couple of blocks to get to the correct metro line, bought tickets, and were on our way to the Santo Domingo stop which put us in the middle of Gran Via. The metro in Madrid is an underground train, a subway, that is extremely dependable and cleaner than I would have expected. After a few difficulties reading our map, I asked for directions to the Palacio de la Prensa (Warning: this link is in Spanish! I could not find the English version, so I suggest you use a translator if you are interested in knowing more about our adventure here). We were directed right to it, and five minutes later we were at the call box, asking how to get into salsa and bachata dancing lessons. We were early, so the bouncer told us where it was and that we would have to come later, so we went around the corner to a local bar, got hydrated, ate some more tapas, and then returned to the Palacio de la Prensa for lessons.

We paid 5 euros to get in, a drink included, and went down to sit. It was a spacious area, but at first it was shockingly empty. For a place known for its Monday nights, we sat down looking around, waiting for instructors and students to flood the area. A student, who heard us speaking English outside, asked to sit down and began to speak to our group. He introduced himself, telling us he was interning in Madrid and excited for dance lessons. He was excited to brush up on his salsa and bachata skills. We continued to chat as everything was being set up, but we were becoming more and more convinced that we were not going to get a lesson. All of a sudden, it seemed as if there was a mob of people there, girlfriends, couples, and single people were all gathering towards the dancefloor.  My new friend asked me if I would dance, and two hours later, we had some (new to me!!!) bachata and salsa skills under our belts.

Sunday and Monday were filled with exploration, trying new things, asking questions, dusting off my language skills in Spanish, and interacting with a lot of people I did not know. Whether it was in class, on the streets, in coffee shops, or at a store, everything seemed just new enough to be, simultaneously, daunting and exciting.

I know, I know! This introductory post was super long! A lot has been packed into my first days in Madrid, and I will do my best to update much more often to avoid long posts, and I will make sure to upload a ton of pictures! Feel free to comment on social media if you have any questions, suggestions, or comments about what’s happening in Madrid! Ciao!